Researchers in the HSC College of Pharmacy Department of Pharmaceutical Sciences and Pharmaceutical Analysis Core Laboratory are engaged in many of the various stages of the drug discovery and development process discussed below.

The Drug Discovery and Development Process 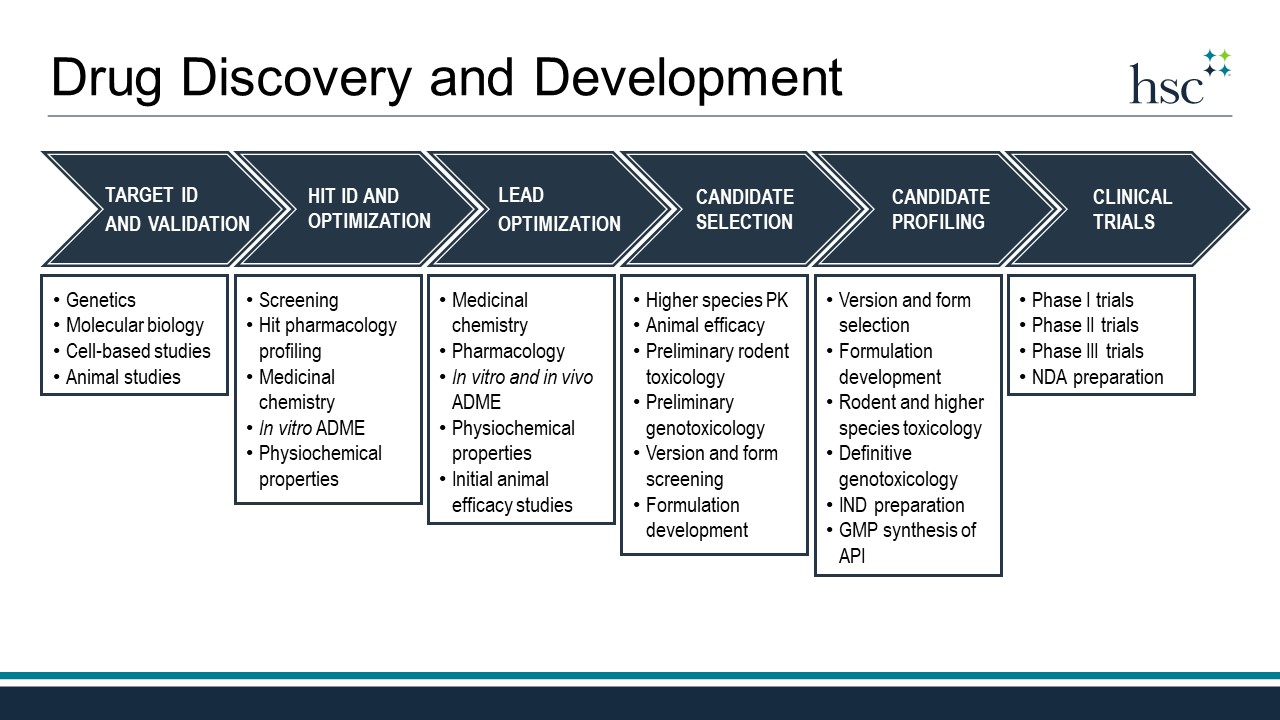 The drug discovery and development process begins with a hypothesis that modulation of a biological target will be therapeutically beneficial in a particular disease. Common biological targets include proteins such as receptors, enzymes, ion-channels, and transporters. Researchers engaged in target identification and validation work to prove that such targets are indeed connected to the disease and also druggable, which means that they can be modulated by a biologic or small molecule drug.

Target identification and validation often involves genetics and utilizes molecular biology techniques to perform a variety of studies in cell-based models. Animal studies that employ genetically modified or pharmacologically challenged rodents are often a significant component of this stage as well. Once a target is validated, the search for a hit compound begins.

A hit compound is a molecule that has been demonstrated to modulate the target of interest in an in vitro biological assay. Small molecule hits may be natural products, semi-synthetic, or fully synthetic compounds. Hits can be identified through a variety of methods with high-throughput screening (HTS), virtual screening, and fragment-based screening representing popular approaches. Hits identified through screens must be confirmed and profiled using secondary assays that verify target engagement and measure off-target effects. At this stage, medicinal chemists usually prepare analogs of verified hits that are then tested for their activity at the target to develop Structure-Activity Relationships (SAR). Often analog design is done in collaboration with computational chemists that employ molecular modeling and in silico docking to predict molecules that can optimally engage the target. Hit optimization usually involves preliminary assessment of ADME and physiochemical properties through in vitro studies and culminates in the identification of a lead series. Every organization defines a lead series differently; however, one definition is a chemical scaffold with multiple active analogs and sufficient profiling to indicate that continued optimization will lead to the discovery of a clinical candidate—a single molecule to be advanced to human clinical trials.

Lead optimization continues the iterative process of SAR development and analog synthesis. Often optimization will heavily focus on drug metabolism and pharmacokinetics and include studies in rodents to measure clearance, bioavailability, and tissue distribution of experimental compounds. In vitro screening remains important and includes studies to assess drug-drug interaction risk and efflux transporter potential. Here again, computational studies and modeling can aid the drug design process in the optimization process. Lead optimization also includes initial rounds of in vivo efficacy studies to evaluate the pharmacodynamics of experimental drugs in animal models. Ideally, lead optimization will culminate in a small number (3-5) of molecules to be extensively profiled in search of the clinical candidate.

This candidate selection process will often include version and form screening to identify potential salts and crystal forms with favorable properties. Animal efficacy studies in additional models will continue and preliminary rodent toxicology and genotoxicology will be assessed at this stage as well. If pharmacokinetics in higher species was not conducted during lead optimization, it will occur at this stage prior to selection of the clinical candidate molecule. Formulation development also often begins at this stage in support of animal efficacy and toxicology studies.

Once the clinical candidate molecule is identified, it moves into a host of profiling studies to prepare for human clinical trials. The optimized final version and form will be chosen and formulation studies to optimize the drug product for clinical studies will commence, as will GMP synthesis of the active pharmaceutical ingredient (API). Rodent and higher species dose-range finding and repeat-dose, multi-day toxicology studies are completed during this time. Likewise, definitive genotoxicology is assessed under GLP conditions. Studies done during candidate profiling will make up critical components of the Investigational New Drug (IND) application, which must be evaluated and approved by the FDA prior to clinical trials.

Connect with HSC Faculty and Labs

Faculty with ongoing research projects in drug discovery and development include:

HSC College of Pharmacy offers academic tracks in both pharmacometrics and in drug discovery and development.

For more information about HSC College of Pharmacy’s research in drug discovery and development, contact: