While the debate about the potential benefit of e-cigarettes/vapes for long-term cigarette smokers continues, tobacco and independent companies are busy creating a new generation of people addicted to nicotine.

Cigarette smoking has been trending down in the U.S. for years, particularly for youth. However, with all the wins in youth cigarette prevention, there is a new threat that will lead the next generation of kids to become addicted to nicotine. Electronic cigarettes (E-cigs, E-pens, E-hookahs, Vapes, and JUUL) are now the leading tobacco product used by youth. These devices originally looked like cigarettes but have come to now include various designs like the “tank system” or the JUUL that looks like a USB. In these devices are “juices”, which are liquids that can be vaporized, and the majority contain nicotine which is the addictive substance found in tobacco leaves. Most of these devices produce a large volume of exhaled vapor (aerosol). Marketing efforts specifically call it vapor to avoid the word smoke and any association with cigarettes, even though companies promote the idea that e-cigarettes can potentially help adult smokers quit, a notion that has not been proven. The juices come flavored, often in kid-friendly flavors such as gummy bear or cotton candy. The packaging presents them as fun products, even very similar to known juices or sodas. JUUL created a new product that produces very little exhaled vapor – which also allows for hidden use. 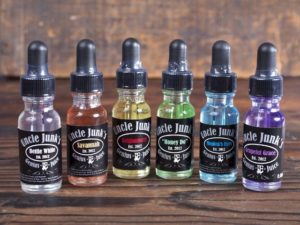 These products are available in vape shops and purchased easily on the internet. A search of Amazon.com will reveal many although Amazon can sell only accessories and not products containing nicotine.  Current youth culture has adopted vaping as different from older generations’ cigarette and cigars and view them as less harmful. High school students are using the devices in classrooms and bathrooms, with the administration struggling to keep up. Students as young as middle school are using and well-versed in the culture and norms around the names and uses of vapes and JUUL”. Elementary school students are also aware of vaping and have many questions about their relative harm compared to cigarettes.  The e-cigarette and tobacco companies target youth directly, with many advertising within social media sites and games frequented by youth, likely in venues that adults do not even see. Some products propose to contain flavor only and no nicotine. For those that actually do not contain nicotine, while this would mean less addictive, it does not mean without harm. Many of the flavors approved for use were determined safe for humans based on eating, not breathing in. Recent scientific findings have demonstrated that in even just a few of the flavors tested (compared to the thousands on the market) there is damage to lung cells. Recall the popcorn lung problems in the early 2000s when the butter flavors approved as safe to eat caused lung disease in the factory workers who regularly inhaled the product. Other substances in the liquid are often oil-based. Lungs are not meant to filter oil and use can lead to a coating of the lungs.

As a tobacco expert who spent years studying the rise of hookah among youth, I regularly get calls from school administrators, friends and family with questions about how to combat this with our youth. I hear stories of concern about what might be in the products, as well as the high amount of use in our local schools. For those of us who have watched the years of suffering for former smokers, we are concerned about a new generation of users becoming addicted to product, of which we know very little.

Educating youth and parents is important. Parents need to know what the products look like and that the products are both addictive and harmful. Many of the products remain unregulated and their ingredients, including amount of nicotine, is unknown.   One reason high school students may be using during the school day is because they are addicted and experiencing nicotine withdrawal. Youth under age 18 who gain access to these products through peers and the internet do not have access to quit smoking medicines (like the nicotine patch or gum) that help with withdrawal symptoms. Schools should offer assistance and treatment options rather than punishment, but this requires resources in often already stretched budgets.

Policies, particularly raising the sale age of tobacco products to 21, would also be effective in reducing youth use. In the United States, currently 6 states and over 300 municipalities in 21 different states have adopted laws that increased the sale age of tobacco and e-cigarettes to 21 years old. The state of Texas considered this policy during the 2017 legislative session, making its way out of the Public Health and Human Services committee, but the bill stalled on the House floor calendar due to legislative deadlines.

Shortly after session ended, youth, young adults, civic and community members as well as health advocates in San Antonio worked with the leadership in San Antonio’s Health Department to discuss a policy for their city. After several months of public education, community meetings and town halls, in January 2018, the city council voted in favor 9 – 2, to pass an ordinance to raise the age of sale to 21. Implementation went into effect on October 1st.

With the 86th legislative session around the corner, Texas legislators will once again consider the same policy. The Texas Tobacco21 coalition has been working all year to increase supporters and spread the word about this youth prevention policy.  During the month of November, several community education events will be held around the state, including online webinars to learn more about the evidence and impact of “raising the age.” To learn more, visit www.texas21.org and follow the coalition on their social media’s Facebook page and Twitter handle.