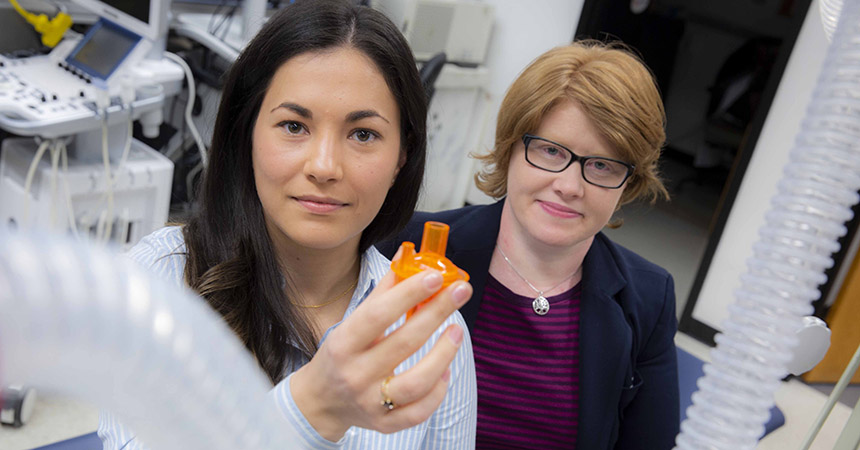 After four months in North Texas, Dr. Nathalie Holme heads back to her native Norway with scientific data about cerebral blood flow and a pair of cowboy boots.

“I’ve learned so much,” said Dr. Holme, adding that she came to the UNT Health Science Center in pursuit of knowledge.

Dr. Holme, an MD and Fulbright Fellow from Norway, conducted research that will be included in her dissertation at the University of Oslo. She worked in the Cerebral &amp; Cardiovascular Physiology Laboratory under the guidance of Caroline Rickards, PhD, Associate Professor of Physiology & Anatomy.

“It’s very exciting coming here because it is a very interesting project that I wouldn’t have been able to do back home,” she said.

Dr. Holme, who is completing a PhD in human cardiovascular physiology, studied brain blood flow and oxygenation responses to resistance breathing in Fort Worth.

The research relied on use of an inspiratory resistance device, which is a medical tool sold by Zoll Medical Corporation. As part of the study, the respiratory, cardiovascular and cerebrovascular responses of 12 participants were recorded while breathing in room air and breathing in hypoxic gas.

“We have the subjects breathing with the resistance device under those two different gas conditions and then we measure brain blood flow and brain tissue oxygen responses,” Dr. Rickards said.

The results could help determine if resistance breathing can protect brain blood flow and oxygenation, Dr. Rickards said, adding it could be a potential clinical therapy.

Dr. Holme said possible situations in which patients need help getting oxygen to the brain include blood loss, traumatic injuries, cardiac arrest, sepsis and even during surgery.

Being a Fulbright Fellow allowed Dr. Holme to learn about Texas inside and outside a lab. She even splurged for a pair of brown cowboy boots – described as her big souvenir.

“It’s been great having someone from another country talking about where they are from, and to compare and contrast their experiences with students here in the United States,” Dr. Rickards said.

The Fulbright Program is an international exchange initiative created after World War II. It is operated in the United States through the Department of State’s Bureau of Educational and Cultural Affairs. It builds understanding between the United States and other countries through “the exchange of persons, knowledge and skills,” according to Fulbright Norway.

Dr. Holme was among 48 Norwegian grantees to the 2019-2020 Fulbright Program who attended universities across the United States, according to Fulbright Norway. Thirty U.S. students and researchers are on Fulbright grants in Norway.

The program is one of the most prestigious and competitive fellowships in the world, Dr. Holme said. In December, there were about 70 foreign “Fulbrighters” across Texas. Five were on the UNT campus in Denton.

“They covered extra costs for coming here,” Dr. Holme said. “I’m not sure I would have been able to come here without it. It’s been a great opportunity. I am very happy to have received it.”